Fiona’s blog – where to from here?

More than 50 people from across forestry attended the FISC/WorkSafe Forestry Summit on November 6, which aimed to identify what else we should be doing to improve our health and safety performance.

The Summit opened with a moving introduction by the whānau of Hone Whaanga, a 38-year-old Gisborne forestry worker killed last year. Hone’s mother and widow spoke of the need in the sector for manaakitanga – caring for each other. They also spoke of the concept of kaitiakitanga (guardianship), which combined with manaakitanga provides a framework for looking after one another.

The key issues identified by participants on the day will be important inputs into the development of an action plan for what else the sector needs to work on to take the next step in improving health and safety.

Three key themes emerged as having a fundamental impact:

A number of possible initiatives were identified and a small working group is being formed to support the next steps. These will include some immediate initiatives and some projects that are more long-term. I’ll give you an update on these activities next year.

Thanks to everyone who took part in the Summit.

The latest IRIS injury report, for the September quarter, shows a decreasing trend in the total incident frequency rate since October 2017.

The critical risk area with the highest number of incidents was felling, followed by log truck load tensioning. There were five lost time felling injuries. Two were the result of being cut by the chainsaw and the rest from material falling from the canopy above.

Survey shows improvements, but still work to do

The results of a survey of people working in forestry suggests there have been improvements in health and safety over the last couple of years. But there is still much work to do.

Most respondents said leadership had improved, and a slight majority said culture had also improved. But health and safety are not always factored in when work is planned, and about half of respondents thought worker competency had stayed the same or decreased in recent years.

The survey was done as part of an evaluation of FISC’s work programme. The results, together with the outcome of the Summit, will help shape FISC’s future work programme.

Tailgate topic – Driving, to work, and at work

Driving is one of the things most likely to cause injury or death in forestry. Always tell others where you’re going and when you’re coming back, and call in your position on the RT. 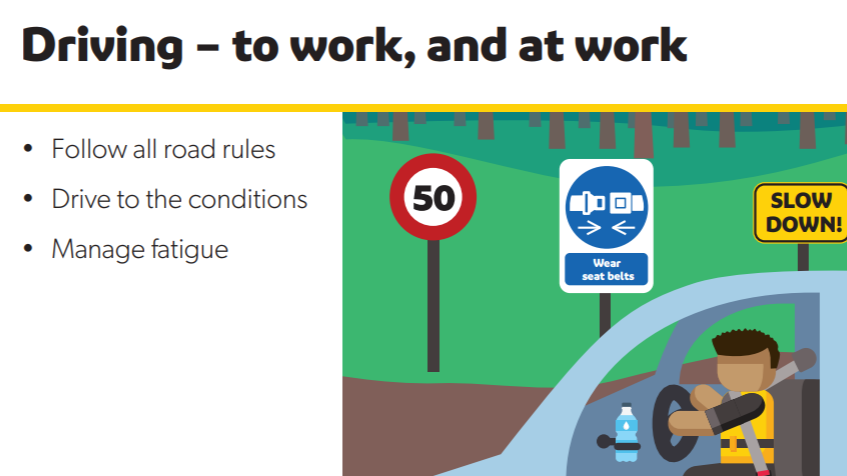 Always drive to the conditions